We've got the information about a ghost in the forest of Dinslaken. He is wearing an uniform from a german soldier of the 2nd world war. So we planned to do a paranormal investigation in the area. A few days ago we've got a contact-calling from the german radio-station 1Live, because they asked us for an interview/report. So we decided, that they could make the interview/report with us on the investigation in the dark forest.

It is possible, that the "Ghost" is the german Soldier "Bruno Brusten"; he died in march 1945 in the forest; in the forest is also his official grave. In the german newspaper Rheinische Post from 02.09.2009 was an article over him and his grave. Link Zeitungsartikel

We drove on the 02.11.2012 to Dinslaken and met at 9 p.m. the radio-reporter of 1Live. Our team consisted of Claudia, Markus and Tom, Daniela was busy on her work. The weather conditions were pretty mixed :-), sometimes rainy. But the rain stopped in the evening and in the forest we could see the moon and stars over us and the moonlight between the trees; a nice conversion. After a short briefing with the reporter, we started the investigation in the forest. When Bruno Brusten served as Flakhelfer (german soldier) he died in march 1945. Once there, at first we explained to the reporter our work and the story about this pace (in the 2nd world war and the story about Bruno Brusten). Than took Claudia photos, Markus and Tom worked withe meters and in the meanwhile the reporter asked each of us different questions. The meters (Gauss Master and K2 were used here) did not show any presence of an electromagnetic field, so that we could start with an active voice-recording. Meanwhile, there were no obvious reactions, so we decided  to go to the area where Bruno Brusten was buried (grave). After a short time, we arrived on the place and we could start our walking arround and over the area.

Tom and Markus mades measurements again with the K2, Gausmaster and Trifeld-Meter. No activity on the devices. In the meanwhile Claudia took a lot of pictures. On the display from her camera she could see the following pictures. Later in the evaluation we want to check these pictures on the computer. 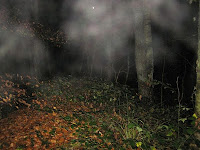 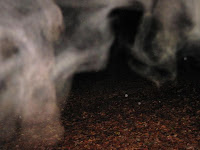 In the evaluation we could see, that the "smoke" was like breath and we couldn't find any indication for a paronormal  phenomenon. In the forest it was cold and wet.

After the short break we go to the refuge in the near of the grave from Bruno Brusten and we position the equipment (meters) and both digital voice-recorders for to do the EVP-Session.

During the EVP-Recording, we've got reactions on the meters; like reactions after the questions.

The reporter was about the reactions of the meters a little bit shoked and scared. We told him, that we didn't have an idea, but we could say more after the evaluation. On the meters we've got reactions 50-100% (K2 red). In the area of the forest exists no power generators or cables, no transmission towers for mobile-phone-networks. We asked also a few times the reporter. "Is your mobilephone off (no power)?", he said yes. Our mobilephones in the car and also off.

But during the investigation and EVP-recording, we've got the speculation, that the activity was not paranormal, because it was to much...

After 2 hours we stopped the investigation and later in the night, we began the evaluation.  The result of them was, that the activity was the result from mobilephone-signals. So we thought, that the reporter made a mistake, after he thought, that his mobilephone was off.

On the Pictures, Videos and EVP's we couldn't find any indication for paranormal activity, but we want to come back and than without a reporter, so we can check the area again. And than without mobilephone-signals hopefully.... :-)

A record from the german radio-show you can find here in our Youtube-Channel:

Together with a lot of other videos from investiagtions ans so :-)